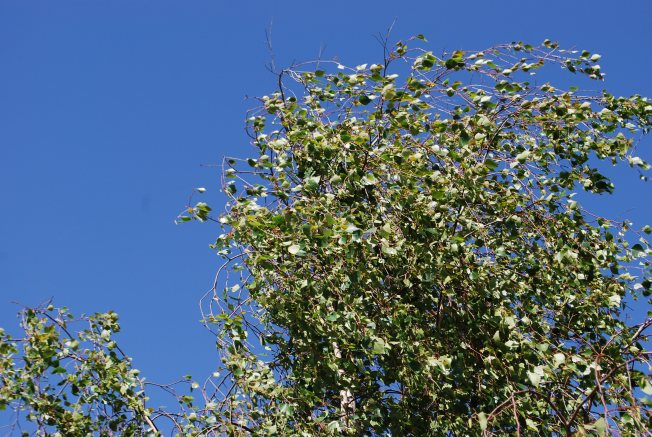 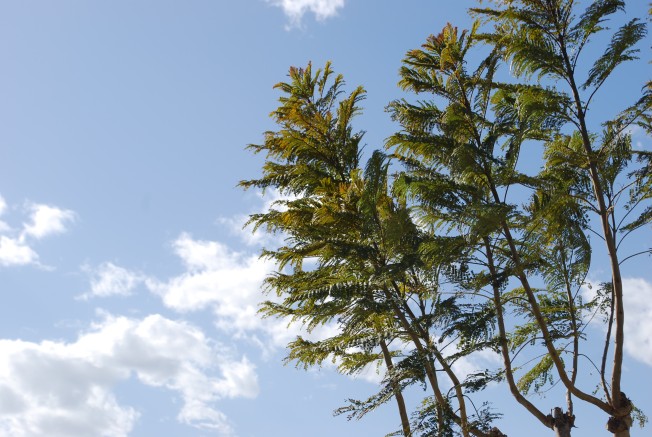 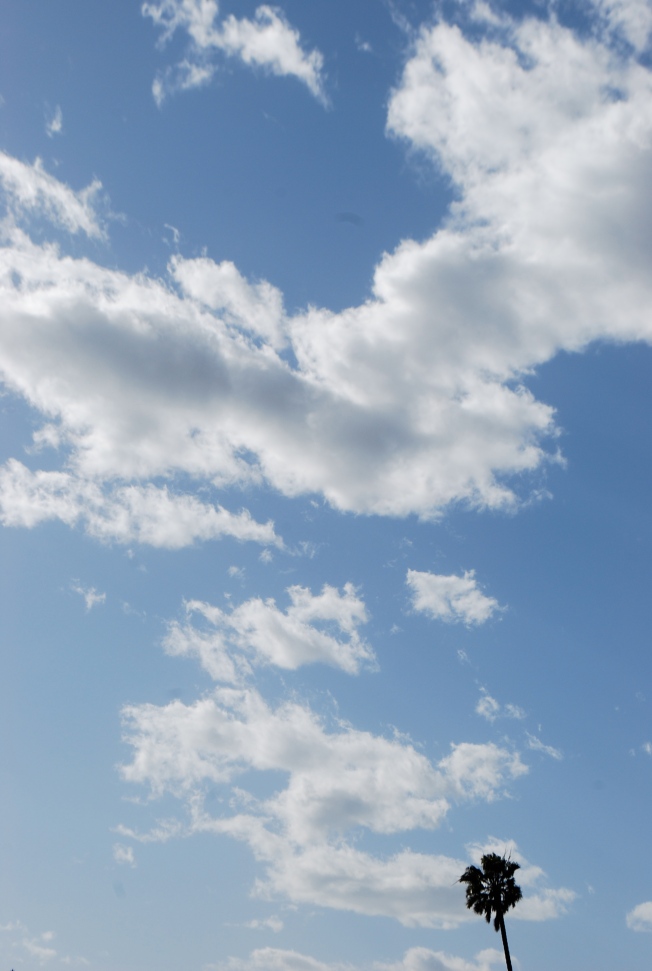 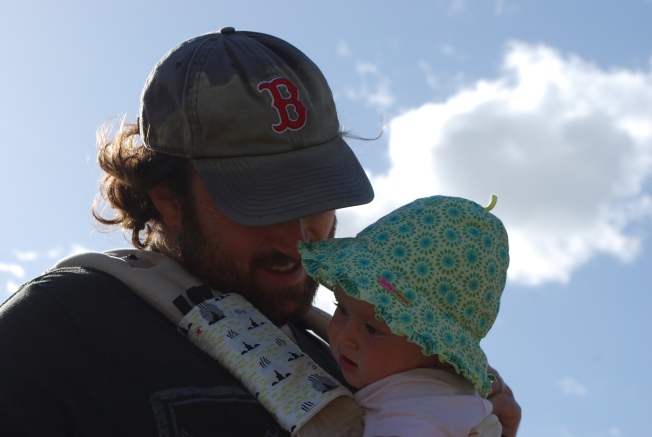 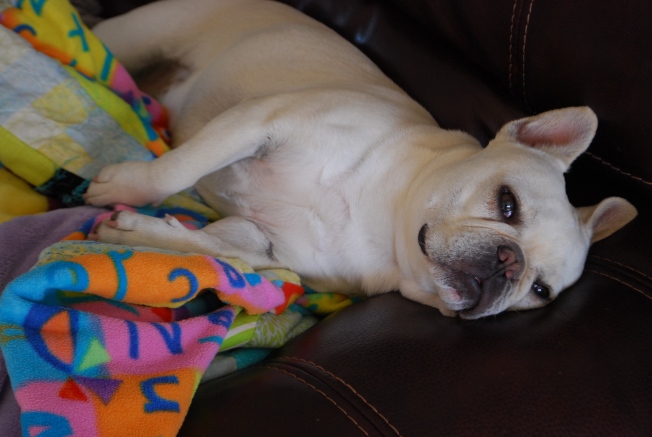 Whenever it’s windy like it was today I think of Winnie the pooh.

We wanted to get maximum wind chime chiming out of today’s weather, so I made Jeff switch out the hanging plant with the wind chime. Ellie and I enjoyed hearing the chimes the rest of the day.

The clouds were beautiful on our afternoon dog walk, big, fluffy and spread out through the bright blue sky. I think I took almost twenty photos of them.

The wind makes dogs a bit crazy. Charlotte ran herself into a frenzy then passed out on the fresh, out-of-the-dryer, clean laundry waiting to be folded.

Happy “Windsday” to you!

We have high needs dogs. Yes, you know how Dr. Sears talks about the high needs baby? We have dogs that fit that description to a tee. When my husband and I decided to get our first dog we put in a lot of research. We read all of the popular training books, Cesar Milan‘s show was tivoed every time it aired and the best leashes and beds and collars were purchased in anticipation.

We decided after meeting several and reading up on them that we would get a French Bulldog. We knew we may be in for some vet bills later on with this type of purebred but the pros outweighed the cons (French bulldogs are notorious for skin allergies and respiratory issues). When we found our little baby frenchie we were over the moon in love with her.

She became our baby. Our Charlotte. We still tried very hard to impart all the wisdom we had learned from Cesar and the books we had read. But, as things go in life, plans and preparations tend to fall by the way side when you have the real thing. 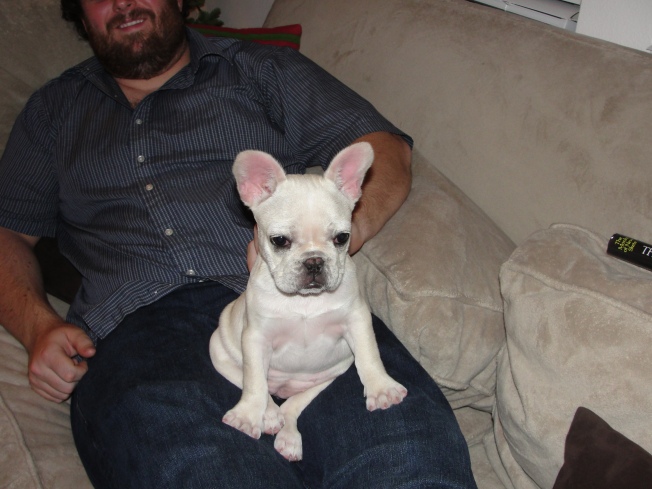 I could literally write a novel on our funny, crazy, rascal Frenchie Charlotte, but that’s not quite what this post is about. So I will continue on and save the rest of her story for some time later. Our other dog, Linus came almost a year after we got Charlotte.

We loved our purebred Frenchie dearly but were feeling guilty with the fact that we could have rescued instead. So that’s just what we did this time around. Linus was a scraggly puppy we got from a local rescue organization. 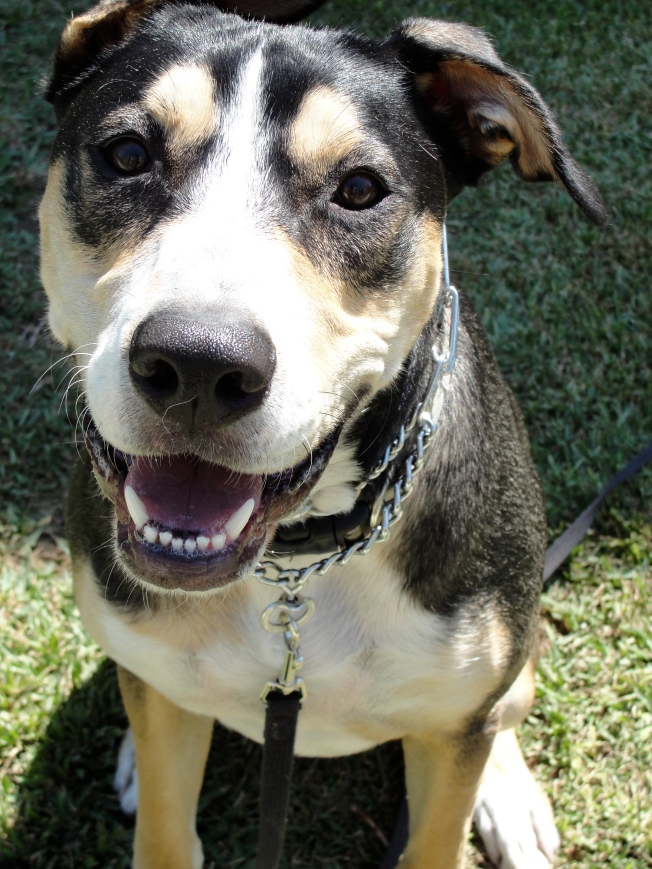 We had seen all sorts of rescue dogs from all sorts of agencies and when we saw Linus (originally named Goofy) we just knew we had to have him. We thought we would have no trouble with skin issues or allergies with our mutt. Everyone told us how healthy their rescued mix breeds were and we were excited not to be spending a fortune at the vet like we already had been doing with Charlotte (pnemonia and mites being the big money contenders in the first year we had her). Well, we were totally wrong. Linus has been far worse medically than Charlotte. He has gotten injured several times, sores on his paw, an incident of ripping the pad skin right off his poor paw and the biggest issue has been allergies. This dog has crazy allergies! With allergies comes expensive dog food. But even with the expensive dog food, the allergies seemed to persist, the dogs seemed to get sick very often and they would often refuse to eat the kibble all together!  We read up on diet and decided to approach the allergies and gastrointestinal issues a little differently. We decided we would home cook their food.

When I tell people we home cook their meals, most people look at me like I’m nuts but it’s helped allergies and overall health immensly and it has cut our vet bills down as well.  We also feel better about knowing what exactly is going into their bodies, even if they’re just dogs.

*Since this post is VERY long, I will break this up into another post. Tomorrow I will talk about our home cooked routine and the problems we are now encountering with our wonderful, high needs dogs.