“A single photo. Capturing a moment from the week, a simple, special, extraordinary moment. A moment I want to pause, savor and remember.” – joining soulemama this Friday! Have a great weekend!

MAKING: Yesterday was Jeff’s birthday. Being that it was a Wednesday workday, the day was pretty much like every other but I hoped we made it a little more special with some presents (primarily beer/brew books for my brewer husband) and some homemade goodies as well.

Beer books, beer t-shirt, a framed picture of Daddy with his little girl for his home office and a little something I whipped up- an embroidered (freehand) Hop plant. 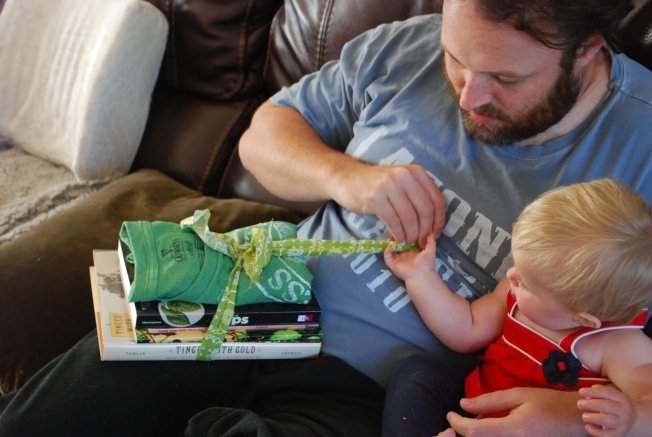 I’m also going to include the cake I made for Jeff’s birthday. I was so excited about it because it was a Chocolate Beer Cake and I spent the night before and the morning of working my butt off to make it with a little girl tugging at my heels the whole time. It was an adorable cake but looks can unfortunatly be deceiving. I’m not sure where I went wrong but let’s just say we only had one piece. Tomorrow I plan to stick to what I know best and make it up to him with some chocolate chip cookies. 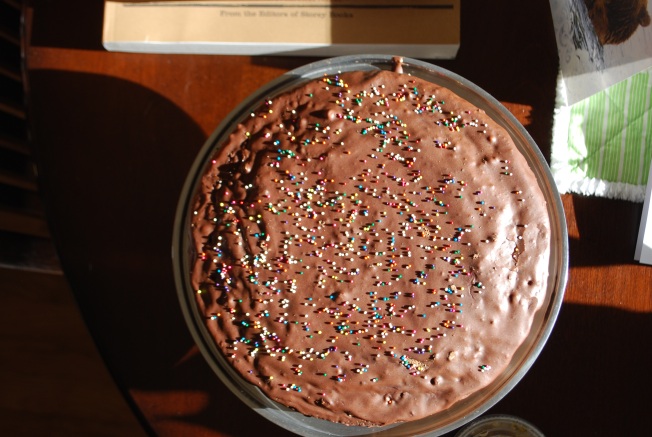 At least he got a good wish out of the cake!

As for LISTENING: Of course we have sung Happy Birthday a few times to dear old Dad this week but other than that we’ve been rotating between that Steve Martin c.d., some Sinatra and a bit of Elizabeth Mitchell while we play and fold laundry.

*joining Dawn with Making and Listening.

We took a little hike the other day to check out the newly opened Ventura Botanical Gardens. Right now it’s mostly California shrubbery and wildflowers but the city has major plans for a full Botanical Garden that will include many different walking trails and different flora throughout. The views from this hike are lovely and although the trail was rather crowded with families and their dogs, it was nice to see so many people out enjoying the outdoors and the trail still seemed rather quiet and peaceful. 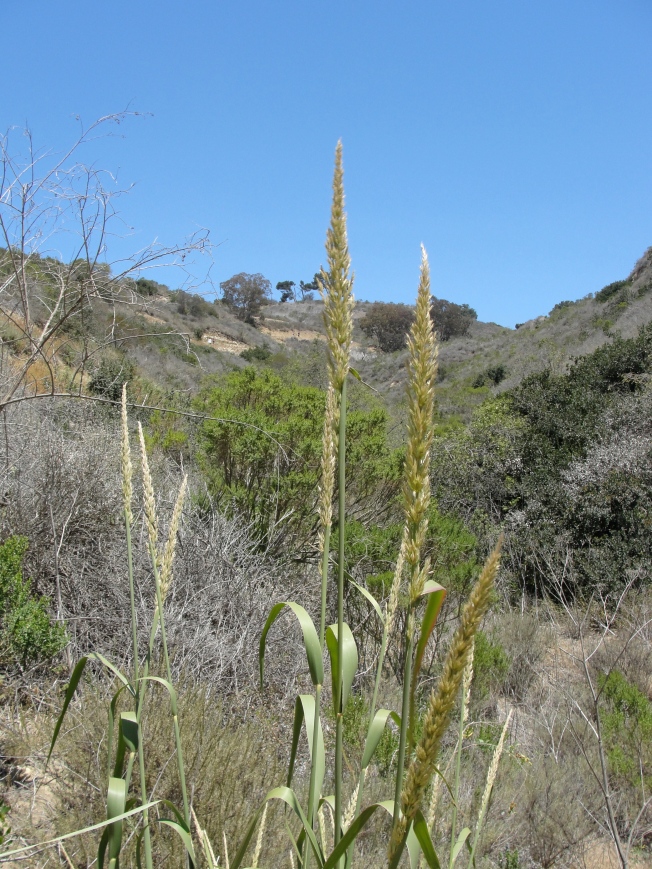 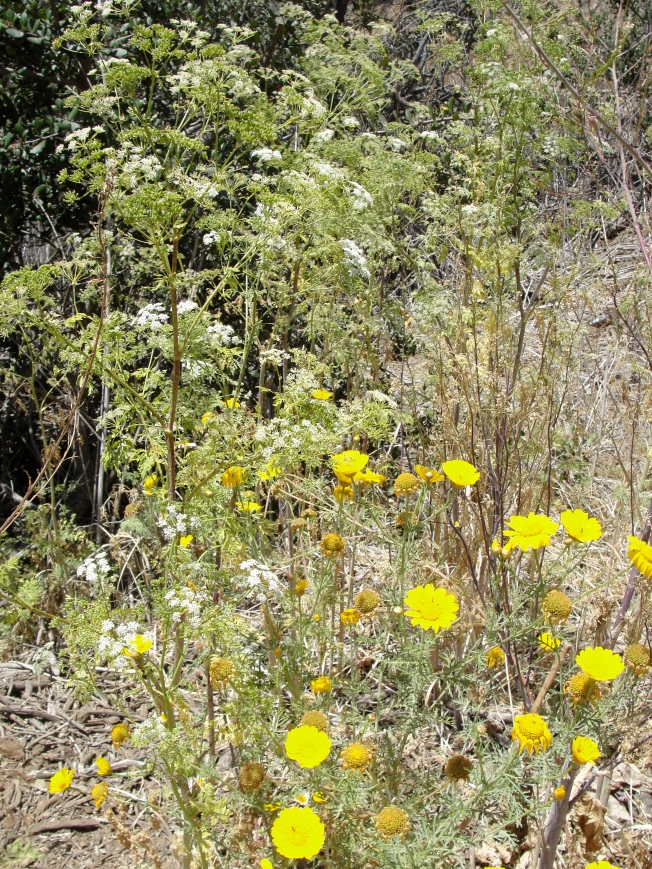 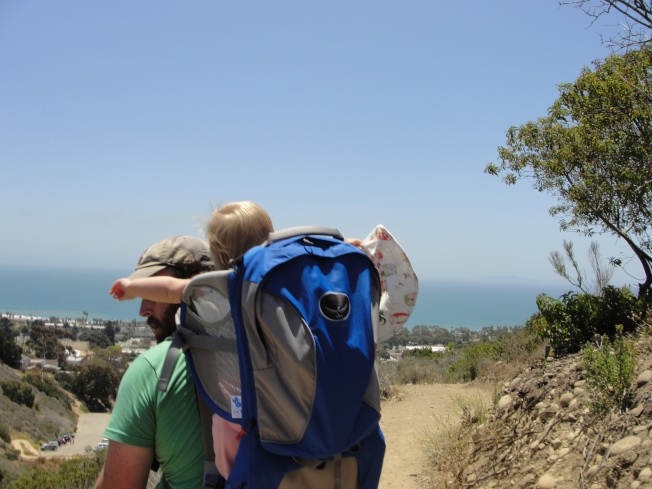 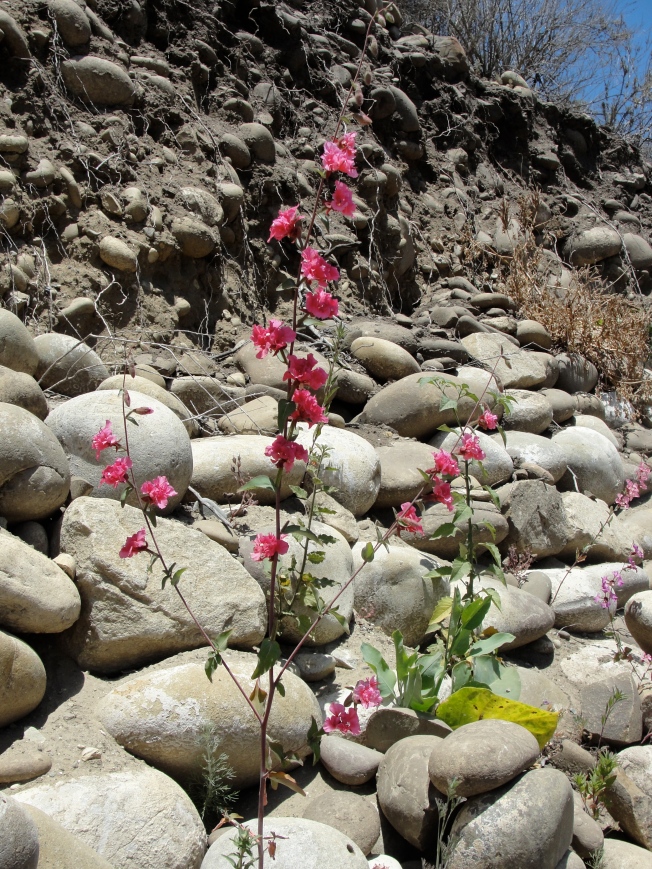 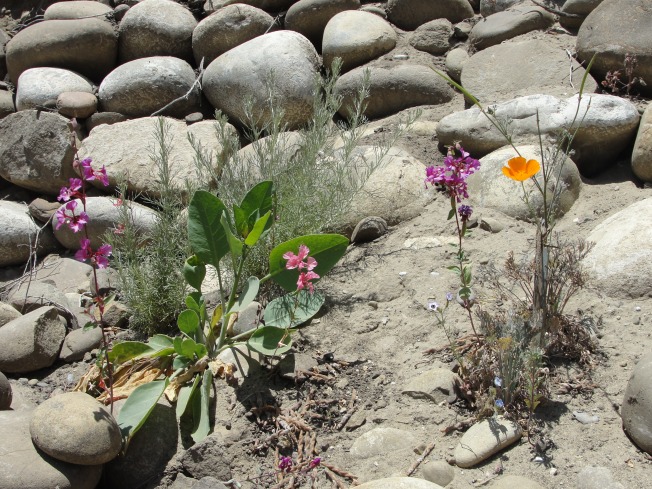 There were some beautiful little wildflowers hidden and scattered throughout the trail. We came across a honeycomb from a bee hive that was strewn out along the trail. It was a neat site to see and photograph. Ellie didn’t seem to enjoy the hike as much as we would have liked her to. Half way down the trail she was done and let us know. We hope as she gets older she will enjoy taking these little hikes with us. I know we enjoy being outside in the California open. 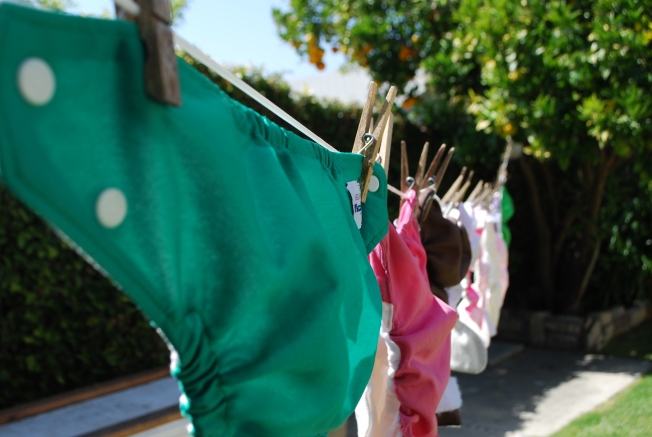 I’ve been asked by many people if cloth diapering is hard? Doesn’t it take up so much time? Aren’t you always doing laundry? I am doing laundry a lot these days, but cloth diapering has become so second nature I don’t notice the extra load any more. In fact, it’s a routine I rather enjoy.  I hear that a lot from my cloth diapering Mama friends too. It’s not like regular laundry. It’s laundry that becomes almost like a meditation. There is a rhythm to washing your little ones diapers that brings a quiet serenity. Every other day I wash the diapers, carefully pulling covers from the wash and drying many of the inserts. I take the wet covers outside with me and hang each one carefully on the line, making sure the sun shines the stains out. It’s here that I feel the warmth of the mid-morning sun. I take an extra long breath and smile at the colorful banner I’ve just created, spread across the yard. Ellie helps me now. She sits in the grass and pulls out the diapers one by one and waves them in the air proudly. She likes standing up, hanging onto the laundry basket. The moment is hers too. 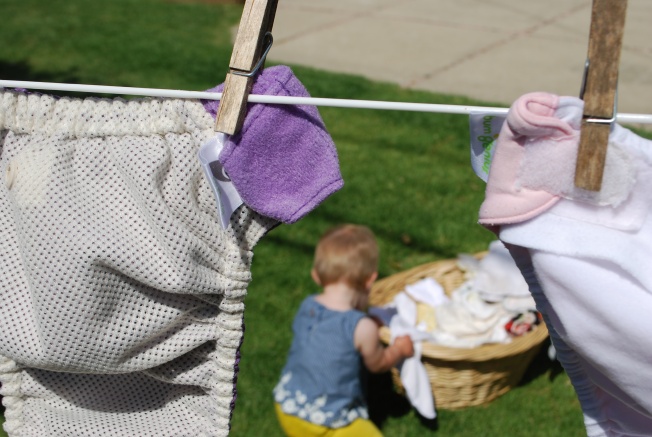 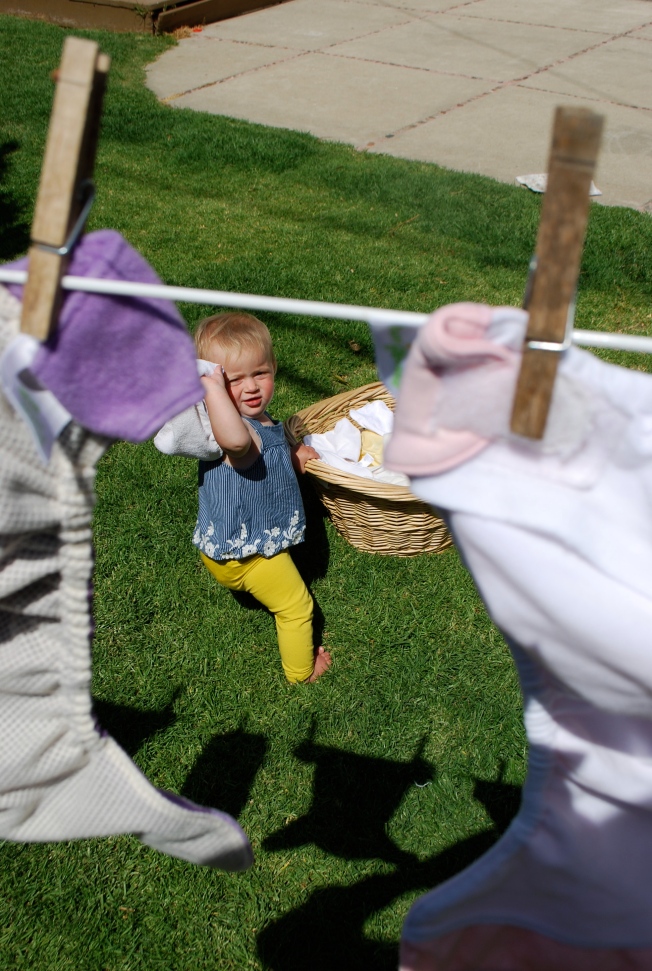 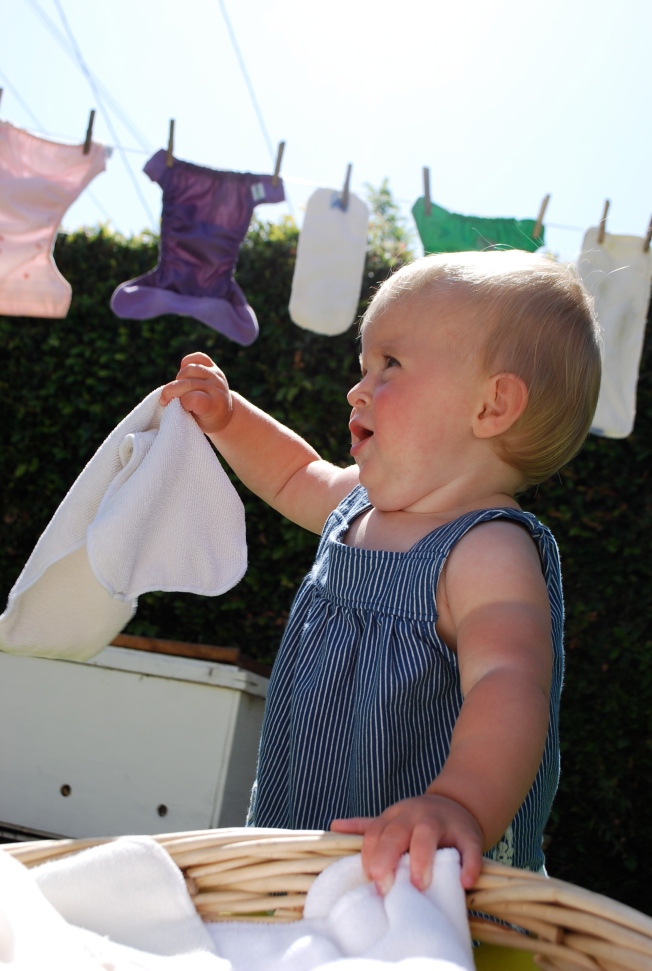 The line drying is only the beginning of the cloth ritual. When the diapers are dry and fluffy we shuttle them inside and begin the process of stuffing them or putting them together, preparing them for the day. Inserts are put in piles according to the type of diaper they belong to. Velcro is inspected for fuzz and each diaper is lovingly put together again, all ready for my baby girl to wear. Nice and clean, soft and fluffy. There’s something soothing and comforting about this ritual. A chore with repetitive meditative properties. I smile to myself as I place each finished, put together diaper in the basket. This task is done and my heart and soul are lighter as I scoop my little girl up in my arms and kiss her, patting that soft padded, cloth diapered bum… we’re ready to take on the day. 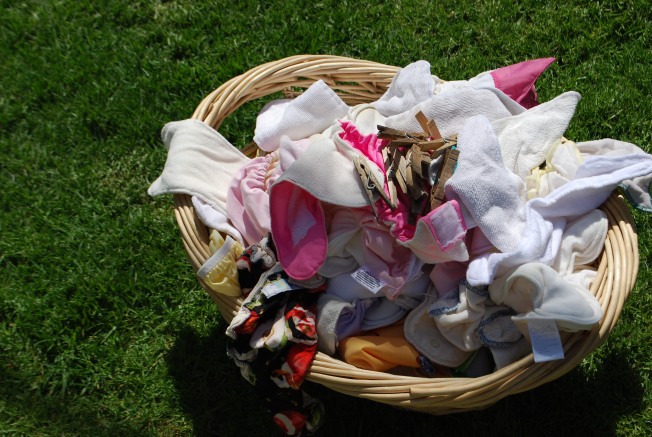 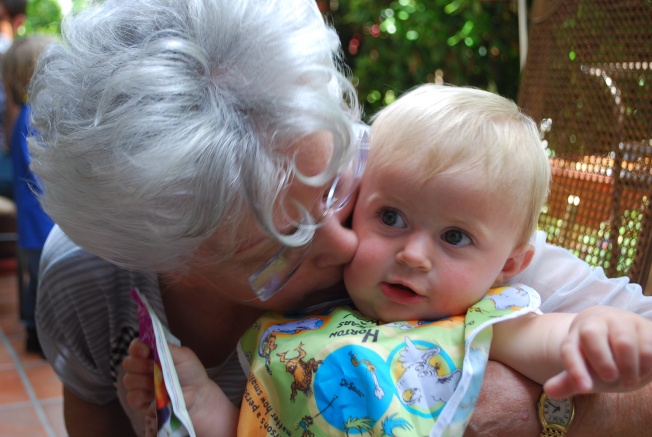 A weekend consisting mostly of gardening, laundry, playing at home, visiting the farmers market and all of the other regular weekend chores. Sunday however, was spent at my Grandmother’s house in Los Angeles celebrating my Uncle’s birthday. My Grandma was kind enough to add Jeff’s upcoming birthday in the festivities as well. Besides the horrible traffic we had to endure on our trip back home, it was a fun-filled day of family and too much sugar. The best part is, there’s still one more day of weekend to be had! Happy Memorial Day!

*joining Amanda at The Habit. 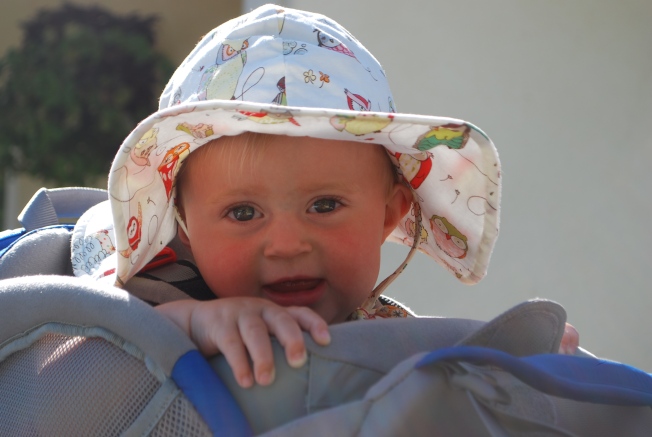 eloise: this week you have been a rascal! Those teeth have still not come in, even though we can feel nubs pushing their way out. This has made for a grumpy baby. However, I think you have quite the personality shining through too. You know what you want and you let us know! You are throwing your body back when we try to put you in the car seat or the stroller. You will slap food away when we offer it and sometimes throw whatever is in your hand. You are struggling through every diaper and clothing change. You are quite the rascal these days! We’re trying our best to be patient and parent gently. All these tough times are worth it though when you snuggle in close to us at night. You cuddled into Daddy’s chest while we took the dogs for their walk and he melted with love. You curled up with me while I rocked you to sleep the other night and I hugged you close and breathed your sweet smell in. We love you our spirited girl! And we hope those teeth come in soon too!

*joining Jodi for the lovely 52 project!

Last week I loved this photo, this one and this! 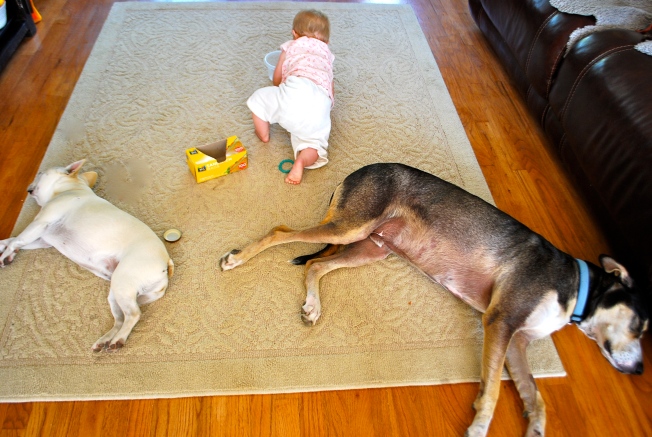 “A single photo. No words. Capturing a moment from the week. A simple, special, extraordinary moment. A moment I want to pause, savor and remember.” – joining Soulemama. Happy Friday! 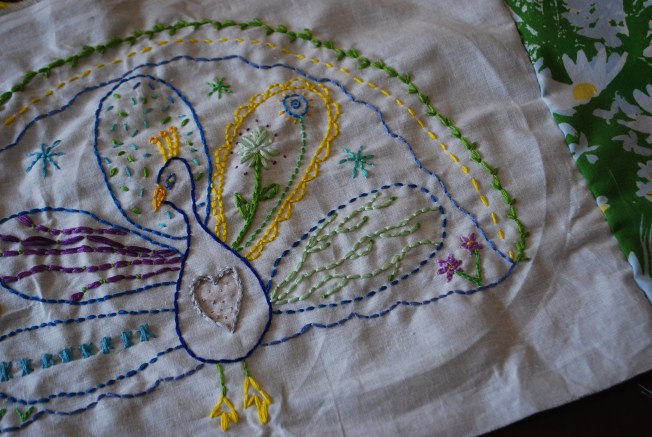 MAKING: Yay! I finished embroidering the Peacock! It was so much fun and I am hooked! (I wanted to post earlier today but I’ve been busy walking the streets with a teething baby, so these pictures are a bit shadowy at the end of the day- I kind of liked the way they came out). But, I managed to get it done here and there and I even added some fabric to the ends. I’m very much looking forward to framing my Spring Peacock.

LISTENING: I received this in the mail this week and I have been playing it whenever I get the chance. I’m a huge fan of Broadway (for those of you who do not know me personally) and a huge fan of Audra McDonald from back when she was in Ragtime. I’ve followed her career, got to see her sing once at Pepperdine University in Malibu and one of my guilty pleasures was the drama Private Practice which she  had a role in for awhile. I’m so glad she has gone back to her Broadway roots though. The songs she chose for this album are lovely and dreamy and just plain good. 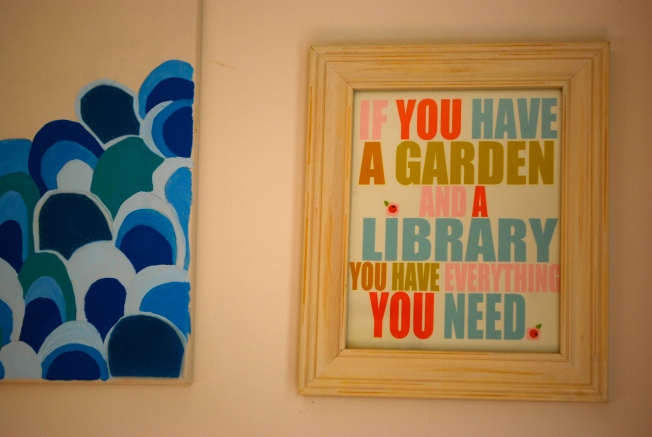 Marigolds planted in the garden to stave off those aphids.

Lunches outside with Daddy, watching those dogs do silly things in the yard.

A great print for this time of year.

Almost done with the peacock.

Every day things are the best toys.

Hand in her mouth, her little fingers come out all red and slimy. Drooling since she was three months old, we thought her teeth would come in quickly. But here we are almost ten months old and no teeth. But they are certainly coming. Tonight was rough. You could tell she was tired, blood shot eyes, yawning, her body wanting to let go and fall asleep, but those gums were just so sore. She would grab my face and gnaw on my jaw. Her gums were hurting her and even my jaw bone was not helping. I brought my sleepy girl back downstairs and tried to rub some teething gel onto her sore gums. She doesn’t want anyone else’s fingers in her mouth but her own so she turns away and the gel spreads to her lips instead. She’s fussy and fidgety and I try my best to be patient and calm as I try to get her to sleep hours after her regular bedtime. We nurse, we rock, we walk around the house. She wants so badly to fall asleep but she’s focusing on those sore gums and flips around in my arms. I hold her and hum a quiet song, rubbing her legs and trying to get her little nine month old body to relax. I sit in the rocker and offer her milk. She cuddles into my body, the body that once held her inside so safe. I’m still her safe, cozy place. I hum her sleepy song and she nurses, fading quickly this time. I pet her warm head, stroking the little threads of baby hair off her forehead. Her body relaxes and as she nurses she rests her hand on my breast. It breaks my heart to see her uncomfortable or in pain. But this is part of growing and so I try to help her by being there. I fear this tough teething night is only the beginning of teeth time woes. There will be more late nights and sore gummy tears, but Mama will be here to hold her when she needs it, to help her get to sleep again and again. I am her safe place. She’s sleeping now. Her head on my chest and her hand on my heart.

*joining Heather and many other writers for Just Write.