So Ellie got this adorable blue sweater from her Gramma a few weekends ago while we were in Santa Barbara for the Ocean Festival. Ellie hasn’t taken this sweater off in weeks. She wants to constantly wear her “Gramma sweater”, for naps, on walks in 70 degree weather. Ellie’s lucky we live so close to the beach breeze that’s been coming in every afternoon. Her sweater is getting lots of wear. Well, the other night it occurred to me that I hadn’t yet made an Ellie peg doll. The first thought that came to mind was how sweet a little Ellie peg doll with a blue sweater would be. And when I get ideas like this in my head, it’s hard to stop my hands from going to work. 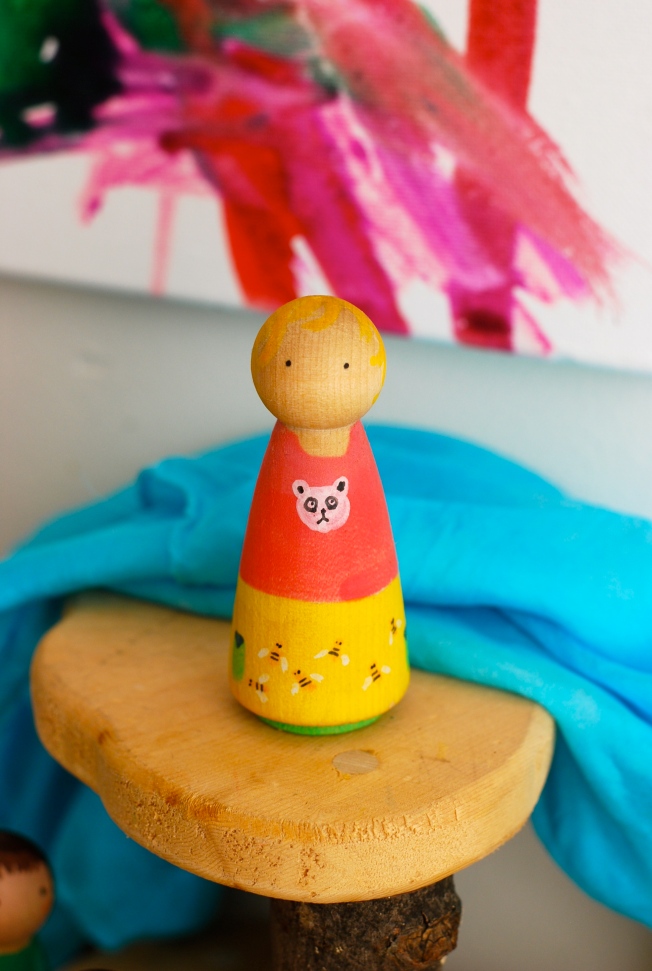 Meet Ellie Peg Doll. She’s outfitted in the panda sleep shirt I made her months ago and her new bee pants she was handed down by her little buddy Summer (another piece of clothing she is coveting lately).

And here she is adorned in her turquoise sweater. I used little scraps of wool felt to create the sweater, even including the white pockets she loves so much.

I added a little tiny button that I secured onto the sweater as well, for the finishing touch. I am rather taken with the whole thing myself.

Ellie seemed to be pretty impressed with the whole thing. She looked it over. She smiled at it and chatted with Ellie Peg doll and then when she tried to pull her hood over her head and realized I had sewn it down, she threw poor Ellie Peg Doll across the room and then proceeded to throw herself on the floor. (Note to self: when making replicas of my daughter in peg form, it is pertinent to replicate EVERY single detail, including a working hood. Thankfully, I only got the happy photos on camera). After we talked about her being upset because Ellie peg doll had no hood, I asked her if she would like to introduce Ellie Peg Doll to the rest of her wooden collection. And in cuteness overload, she marched right over to her table, picked up her good friend Ana (from Frozen of course) and the best of friends were made. 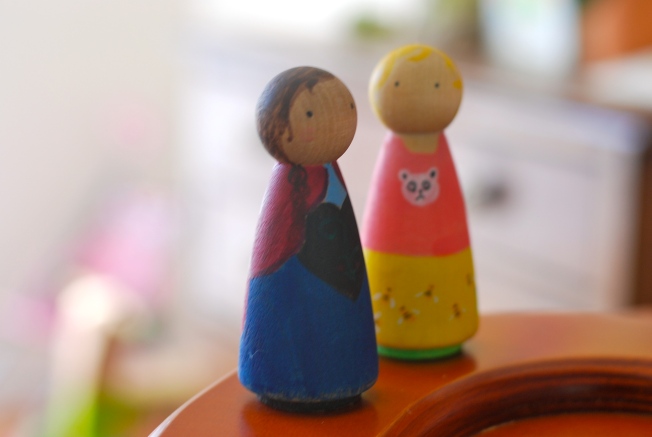